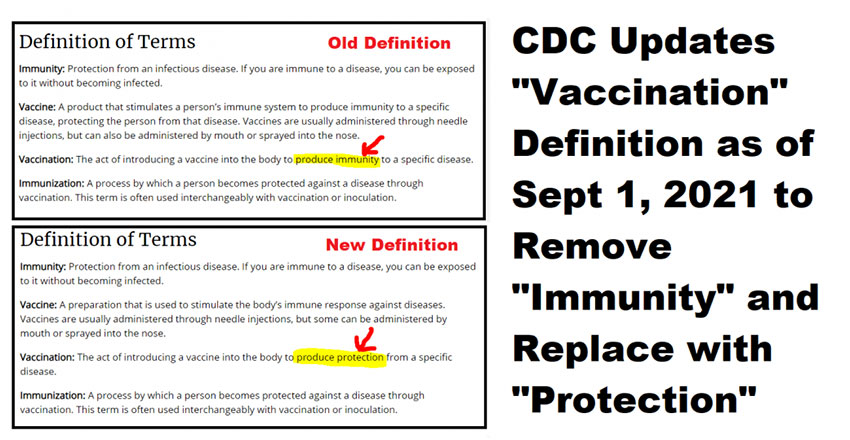 The Israel numbers are very compelling. The Biden team and their allies can no longer say that the vaccines are better than natural immunity, or even comes close.

The Centers for Disease Control (CDC) quietly changed their definition of “Vaccination” on September 1st, exchanging the word “immunity” for “protection,” now that it appears that breakthrough cases can no longer be explained away as an anomaly.

The definition change occurred on the same day – September 1st – that a massive study was released demonstrating that those who had been vaccinated were “13 times more likely to be infected with the Delta variant (what has been called a “breakthrough” infection) than those with natural immunity,” as summarized at the American Conservative.

Several savvy observers exposed the update on social media, and journalist Sharyl Attkisson wrote about the change on her excellent website. The change was also discussed at PJ Media.

Attkisson featured a Tweet from Representative Thomas Massie, who noted that that the CDC definition of “vaccination” was updated twice since 2015.

As usual, there is zero discussion or transparency surrounding the change. It is not a a stretch to speculate that the change comes as data from Israel shows that “natural immunity left after recovering from Covid-19 is stronger over the long run than immunity generated by the Pfizer vaccine.”

It appears that the left must now concede that natural immunity is effective against the coronavirus.

Trackback URL for this entry: https://kickthemallout.com/trackback.php/CDC_Rushed_to_Change_Definition_of_Vaccination_on_Same_Day_Israel_Study_Touts_Natural_Immunity_Over_Vaccine