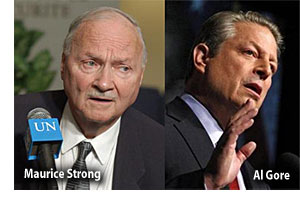 There's an elephant in global warming's living room that few in the mainstream media want to talk about: the creators of the carbon credit scheme are the ones cashing in on it.

The two cherub like choirboys singing loudest in the Holier Than Thou Global Warming Cathedral are Maurice Strong and Al Gore.

This duo has done more than anyone else to advance the alarmism of man-made global warming.

With little media monitoring, both Strong and Gore are cashing in on the lucrative cottage industry known as man-made global warming.


Strong is on the board of directors of the Chicago Climate Exchange, Wikipedia-described as "the world's first and North America's only legally binding greenhouse gas emission registry reduction system for emission sources and offset projects in North America and Brazil."

Gore buys his carbon off-sets from himself--the Generation Investment Management LLP, "an independent, private, owner-managed partnership established in 2004 with offices in London and Washington, D.C." of which he is both chairman and founding partner.

To hear the saving-the-earth singsong of this dynamic duo, even the feather light petals of cherry blossoms in Washington leave a bigger carbon footprint.

It's a strange global warming partnership that Strong and Gore have, but it's one that's working.

Strong is the silent partner, a man whose name often draws a blank in the Washington cocktail circuit. Even though a former Secretary General of the 1992 United Nations Conference on Environment and Development (the much hyped Rio Earth Summit) and Under-Secretary General of the United Nations in the days of a beleaguered Kofi Annan, the Canadian born Strong is little known in the Unites States. That's because he spends most of his time in China where he works to make the communist country the world's next superpower. The nondescript Strong, nonetheless is big cheese in the world of climate change, and is one of the main architects of the coming-your-way-soon Kyoto Protocol.

Gore is the glitzy, media approved front man in the partnership, the flashing neon lights on the global stage warning the masses of the end of Earth, as we know it, and Hollywood's poster boy for greening the silver screen.

The skeptics of man-made global warming believe that Gore and Strong have made climate change "the new religion". Climate change is not the first religion both parties have tried to make stick. Along with former Soviet Union leader Mikhail Gorbachev, Strong, currently president of the Earth Council, has been boasting of replacing the Ten Commandments with the Earth Charter, a golden rule guide for how the masses should treat the environment.

Gore, who has given sermons at the United Nations sponsored Cathedral of St. John the Divine Church in New York City, is a promoter of the religion known as Gaia.

The two environmental gurus also share a belief in radical Malthusian population reduction. According to them, too many people, particularly in the U.S. are polluting the planet, emitting excessive Freon through their refrigerators and jacking up the air conditioning.

But the conduct of Al Gore and Maurice Strong in the capitalist world is one for the books. It's a side of them that may have remained unknown had it not been for the investigative talent of the Executive Intelligence Review (EIR).

The tawdry tale of the top two global warming gurus in the business world goes all the way back to Earth Day, April 17, 1995 when the future author of An Inconvenient Truth traveled to Fall River, Massachusetts, to deliver a green sermon at the headquarters of Molten Metal Technology Inc. (MMTI). MMTI was a firm that proclaimed to have invented a process for recycling metals from waste.Gore praised the Molten Metal firm as a pioneer in the kind of innovative technology that can save the environment, and make money for investors at the same time.

"Gore left a few facts out of his speech that day. First, the firm was run by Strong and a group of Gore intimates, including Peter Knight, the firm's registered lobbyist, and Gore's former top Senate aide," wrote EIR.

"Second, the company had received more than $25 million in U.S. Department of energy (DOE) research and development grants, but had failed to prove that the technology worked on a commercial scale. The company would go on to receive another $8 million in federal taxpayers' cash, at that point, its only source of revenue.

"With Al Gore's Earth Day as a Wall Street calling card, Molten Metal's stock value soared to $35 a share, a range it maintained through October 1996. But along the way, DOE scientists had balked at further funding. When, in March 1996, corporate officers concluded that the federal cash cow was about to run dry, they took action: Between that date and October 1996, seven corporate officers--including Maurice Strong--sold off $15.3 million in personal shares in the company, at top market value. On Oct. 20, 1996--a Sunday--the company issued a press release, announcing for the first time, that DOE funding would be vastly scaled back, and reported the bad news on a conference call with stockbrokers.

"On Monday, the stock plunged by 49%, soon landing at $5 a share.By early 1997, furious stockholders had filed a class action suit against the company and its directors. Ironically, one of the class action lawyers had tangled with Maurice Strong in another insider trading case, involving a Swiss company called AZL Resources, chaired by Strong, who was also a lead shareholder. The AZL case closely mirrored Molten Metal, and in the end, Strong and the other AZL partners agreed to pay $5 million to dodge a jury verdict, when eyewitness evidence surfaced of Strong's role in scamming the value of the company stock up into the stratosphere, before selling it off.

In 1997, Strong went on to accept from Tongsun Park, the Korean man found guilty of illegally acting as an Iraqi agent, $1 million from Saddam Hussein, which was invested in Cordex Petroleum Inc., a company he owned with his son, Fred.

In that year, Gore, still U.S. vice president, was making news for "taking the initiative in creating the Internet."

The leaders of the man-made global warming movement, you might say, get around.

Meanwhile Jumbo's still in global warming's living room, but the duo with the tiniest carbon footprints on earth continue to just tiptoe past him.
Rating: 0.00/5 (0 votes cast)

Trackback URL for this entry: https://kickthemallout.com/trackback.php/Stong_Gore_Cashing_In