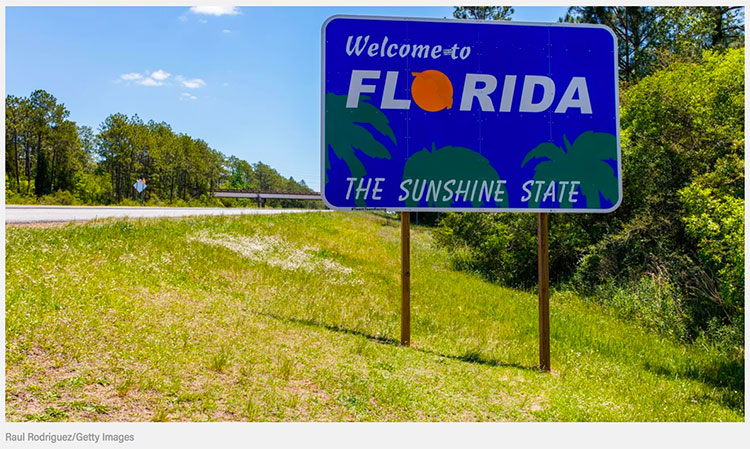 We are being told that our liberties must be suspended in order to keep hospitals from reaching apocalyptic levels. But what if those levels are just above normal and not anywhere near apocalyptic levels? And what if these lockdown measures do nothing to keep the levels down anyway?

Well, if there is anywhere we can cross-check this hypothesis, it would be in Florida, where there is no lockdown or mask mandate. In fact, people are flocking there from out of state to enjoy vacations and host conferences and even to live. Naturally, we'd expect hospital levels to be bursting at the seams if they rise and fall with lockdowns and masks, right?

Well, actually, you can barely see an increase in the hospitalization level in the Sunshine State from previous years, and the current level appears to be on par with the 2018 flu season, which was more of a pandemic flu than other flus in recent years. And in 2018, we did nothing as a nation to suspend liberties.

There is much debate over how to count a COVID hospitalization given the rampant and unprecedented testing of people relative to past flus. But one easy way to observe an apples-to-apples comparison to past flu seasons is to compare the overall average daily census of hospitalizations now to previous years and adjust those numbers per capita to existing population. In other words, if all of the COVID patients are legitimately there because of COVID, we would see an enormous excess in the total number of people in the hospital at any given moment for any ailment. Florida is simply not seeing a gigantic increase.

Here is how the math works: HHS tracks total daily hospital levels in all the states dating back to Jan. 1, 2020. If you take the average daily total hospitalization levels in Florida for the fourth quarter of 2020, you will find an average (some days are more, some are less) of 43,150.

Naturally, I wondered what the levels were in previous years, because the Florida Agency for Health Care Administration publishes quarterly data of hospital censuses for several recent years. I started with the first quarter of 2018, which included the harshest flu season we had in a decade. If you average the total hospital census over the 90 days from Jan. 1 to March 31, it works out to 41,094 people in the hospital on an average day. Adjusting for the population at the time, that would be 1,972 hospitalizations per 1 million people. That is compared to 1,998 per 1 million for this past quarter of 2020 with COVID as the predominant illness.

As you can see, although the hospital numbers for the fourth quarter of 2020 were about 6%-8% higher than in the fourth quarter of the previous two years, it was barely higher than the first quarters of every year. The reason it is fair to compare to the worst months of previous years is because it has become clear that the flu is gone for this year and that COVID-19 is this year's version of the flu. Thus, with flu cases down 98.8%, it is reasonable to assume that the January census will not grow as it typically does during peak flu season.

In other states, lockdown proponents can theoretically suggest that the reason the hospital numbers aren't worse is because of the measures they are taking. However, Florida serves as the perfect control group, given that there is no lockdown and there have been no statewide restrictions in place for several months.

It's also important to remember that as a nation we have thrown hundreds of billions of dollars at hospitals to treat this virus as compared to past flu seasons. So, the level of hospitalization we are equipped to deal with is much higher than in the past.

Off the bat, the numbers for this past quarter are inflated because on Oct. 6, HHS updated its guidance requiring hospitals to include those in "observations beds" as part of the census. Any data from past years did not include observations beds, only inpatient beds where people stayed for over 24 hours.

Also, because the nation is panicked over this virus, unlike during the 2018 flu season, the threshold for people going to the hospital is likely much lower than in past flu seasons. While there are definitely some people who are gravely ill with this virus, we have decided to treat this virus in the hospital much more liberally than any other virus. Hospitals receive higher reimbursement rates for treating COVID-19 patients. However, many of the cases are not necessarily clinical level.

As I noted in November, hospitalization is required in order to treat someone with Remdesivir, the only FDA-approved drug, which was approved on Oct. 22. It's very likely that a certain percentage of those people are not sicker than a typical flu patient who would be treated outpatient, but the Remdesivir necessitates admission to the hospital.

Taking all these factors in totality, especially in a state like Florida with no lockdown, it has become clear that the entire pretext for shutting down our liberties is built upon misinformation and lack of context. In other words, those 900,000 projected excess deaths due to unemployment from lockdowns are all for nothing.

Trackback URL for this entry: https://kickthemallout.com/trackback.php/With_No_Lockdown_or_Mask_Mandates_Florida_Has_Roughly_Same_Hospitalization_Level_As_2018_Flu_Season