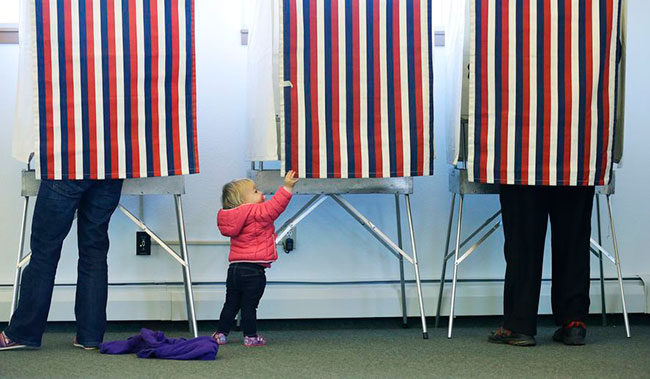 By Stephen Dinan
The Washington
Times

Abdel showed up at his local Pennsylvania motor vehicle office to take his driver’s license test — and walked out having registered to vote, even though he is not a citizen.

He said his command of English isn’t good and the computer system was unclear, but he somehow managed to sign up even though he knew he shouldn’t.

Then there was Angelo, who figured he could vote because he joined the U.S. military, even though he wasn’t a citizen. He, too, signed up at the Pennsylvania motor vehicle bureau and registered as a Democrat. He then voted nearly every year from 2001 through 2014.

He finally wrote to Allegheny County asking to be stricken from the rolls, saying he had been ineligible all along.

Angelo and Abdel are some of the more than 130 people the county has nixed from its voter lists in recent years after discovering they weren’t U.S. citizens and should never have been allowed to register, much less vote, according to a report being released Thursday from the Public Interest Legal Foundation.

Of those, nearly 40 went on to vote in elections before they were removed from the lists, the foundation found.

The vast majority of the people reported themselves only when they did try to seek citizenship or some other immigration benefit — and learned that illegal registration or voting, both felonies, could be hurdles for their applications.

J. Christian Adams, president of the Public Interest Legal Foundation, said it’s impossible to say how many others haven’t been caught because they haven’t reported themselves.

“There’s no doubt that there is far more and far worse. These are just the people who wrote in [saying], ‘Since I’m not a citizen, take me off the roll.’ These are the people who wanted to fix it,” he said. “If you deny this is happening, you’re part of the problem at this point.”

Indeed, while it’s not the massive level of fraud that President Trump complained about last year, the 139 cases in one county in one state are more than the near-zero level that the president’s critics have postulated. One local official in Pennsylvania has estimated that 100,000 illegitimate voters are on the state’s rolls, thanks to problems with PennDOT’s system and its inability to weed out fraud.

Under the 1993 federal “motor voter” law, people who show up to renew licenses or transact other business at motor vehicle bureaus are supposed to be asked if they want to register to vote. The form relies on the honor system for people to swear they are citizens.

The goal of the law was to boost election participation — but it also muddied voting lists.

Allegheny County officials spotted evidence of the problem as far back as 2008 and alerted state officials. The Public Interest Legal Foundation said there is no evidence that the state corrected the mistakes or alerted local officials that they may have thousands of bogus registrations on their lists.

Pennsylvania’s Department of State said it has worked to correct the situation, which a spokeswoman said dated back two decades, or well before the current Democratic governor’s administration.

“At PennDOT driver licensing centers, non-citizen legal residents are no longer given the option of registering to vote. This eliminates the possibility that a non-citizen will inadvertently apply for voter registration because of limited English proficiency or any other reason,” said Ellen Lyon, deputy director of communications for the department.

The department has disputed the 100,000 number, but they did acknowledge there were some problems, sendingnotices to 7,702 registered voters questioning whether they were in fact eligible voters.

The noncitizen voters identified in the foundation’s report described how easy it was to get listed in the first place.

Abdel, whose last name was redacted in the report, registered in 2009 and then realized his mistake when a voter ID appeared in the mail. With the help of his wife and attorney, he fired off a letter saying the PennDOT computer’s instructions were in English and, since he didn’t have a good grasp of the language, he “did not comprehend that I was registering to vote.”

Turan registered in 2009 as a Democrat and then quickly canceled, saying he was stunned that the motor vehicles bureau staffer encouraged him to sign up.

“I don’t speak English nor am I NOT A Citizen![sic]” he said in a letter he dictated to his son. “She should not offer any voting registration to any foreign person who doesn’t speak English.”

Several noncitizens said state employees gave them the impression that their registration was just an application and figured someone would verify their answers to determine whether they were eligible.

Mark Wolosik, the manager of Allegheny County’s elections division, said that someone isn’t him. He said he is just following state policy when he approves all the applications that come to him.

In a statement to The Washington Times, he also said it’s not his job to police the people he later learns had voted fraudulently. He said he figured the federal citizenship agency would do that.

“The information/self-reporting came through the application for citizenship and, as such, that information and details is already in the hands of any agency which would pursue such prosecution,” he said in his statement.

His explanation, though, doesn’t track with the county’s documents, which show some of the cases were reported directly to him and weren’t prompted by the federal citizenship agency.

Mr. Adams said it doesn’t matter how he learned about them and that Mr. Wolosik should feel a duty to report election lawbreakers.

“State elections officials are abdicating their responsibility as custodians of the election system,” Mr. Adams said.

He said he had to battle Allegheny County for the registration data, and he is still involved in a legal fight with the state for a broader set of information. He said that rather than working against him, they should be working with him to clean up their records.

“The better approach for the local and state election officials is to say we’ve got a problem and we want to fix it. But Pennsylvania and every election official I’ve seen in that state is in a state of denial,” Mr. Adams said.

The Allegheny County report, titled “Steeling the Vote,” joins similar Public Interest Legal Foundation reports on noncitizen registration in Virginia and New Jersey. The foundation is also involved in legal battles with officials in Texas and California to get a look at their data.

The report found that the noncitizens in Allegheny County remained on the rolls an average of six years before they were removed.

Of the 139 bogus voters, 74 registered as Democrats and just 23 signed up as Republicans. The others were undeclared or identified with a third party.

Trackback URL for this entry: https://kickthemallout.com/trackback.php/Immigrants_Find_Noncitizen_Voter_Registration_Easy