The data should be a crystal clear warning about the so-called vaccines. Instead, the evil leaders in our government are using it as the reason to double- and triple-down. 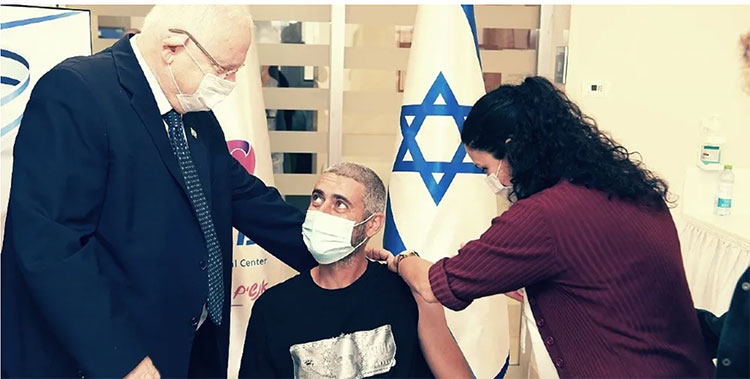 The world is backwards right now, especially when it comes to anything coming out of the White House. The vaccine mandates imposed last week, mandates that are being expanded upon this week, came about at a peculiar time. Based on literally every bit of data coming out of Israel, the most triple-vaxxed nation in the world that relies almost solely on the FDA-Sort-Of-Approved Pfizer jabs, we should be slamming on the brakes.

Instead, the Biden-Harris regime is doubling down.

A shocking report details how the waning effectiveness of the Covid-19 jabs is the reason the White House rushed through booster shots and rolled out the mandates when they did. Instead of doing the scientifically sound move of halting the vaccine push until they can determine why the drugs are failing so miserably, they are doing the politically expedient and eyebrow-raising opposite.

According to POLITICO, the White House has seen the data, which is currently unpublished, and determined that they needed to start forcing as many people as possible to get on the vaccine regimen before it is revealed that this is likely leading us to ceaseless boosters. Those who get on the jab program will be on the jab program for the rest of their lives with a likelihood of shorter and shorter intervals between treatments as the coronavirus mutates.

POLITICO frames it as if this is all about rolling out the boosters, ignoring the conspicuous timing of the vaccine mandates revealed last week. But it’s clear the sudden rush to force vaccines now was to get ahead of the news from Israel that shows they’re simply not working.

As with most articles about vaccines written by left-leaning outlets, POLITICO’s report fails to reveal the big picture. Even as they highlight the clearly duplicitous nature of the vaccine mandates, they continue to cheer them on. This is becoming more and more common to the point that nearly every story that is reluctantly reported about adverse reactions is tainted by editorializing that claims the drugs are still “safe and effective.”

It’s pure cognitive dissonance mixed with gaslighting. Keep that in mind as you read this snippet with emphasis added:

The Biden administration’s push to roll out coronavirus vaccine booster shots this month has largely been shaped by unpublished data from Israel’s vaccination campaign, according to two individuals familiar with the matter.

The Israel data, which is set to be made public as soon as this week, shows that the Pfizer vaccine’s ability to prevent severe disease and hospitalization is waning over time — as is the shot’s protection against mild and moderate disease, the two sources said. The country began administering boosters to people over 60 in July and has now expanded it to people over 30, but it has released relatively little information so far about the effect of the booster campaign.

The Biden administration has long relied on data from Israel, which has one of the highest vaccination rates in the world, to inform its Covid-19 response. Top officials from the White House, the Centers for Disease Control and Prevention and the Food and Drug Administration have analyzed the latest Israeli data for weeks, concluding that the U.S. should begin administering boosters this fall, another senior administration official said.

Although the CDC has published a series of targeted studies that suggest Covid-19 vaccines’ effectiveness against infection is decreasing, particularly in the elderly, the Israeli data is more comprehensive and more alarming, three sources who have reviewed the data told POLITICO on Monday.

The administration’s focus on Israel’s data underscores the extent to which the U.S. is leaning on other countries’ experiences to forecast the next phase of the pandemic here. That is partly because the highly contagious Delta variant swept through other parts of the world first, and partly because of better data tracking in countries like Israel that have national health care systems. The U.S. continues to struggle to collect and analyze reliable Covid-19 data because the federal government has long neglected the country’s public health infrastructure.

Senior administration officials working on the federal government’s response to the pandemic have for weeks debated whether to recommend booster shots for Americans. The White House and top health officials said in mid-August that they planned to roll out the shots for most adults beginning on Sept. 20. The move has sparked tensions between Biden’s top aides, the CDC and the FDA, amid questions about whether domestic data supported the goal. Two senior FDA vaccine scientists who are leaving the agency co-authored an analysis published Monday in the Lancet that found no evidence to support giving booster shots to the general population.

The FDA is examining the Israeli data as it reviews applications from vaccine makers to offer booster shots, three other senior administration officials said. One official stressed that no matter what the domestic or international vaccine data says, the final decision on whether to recommend boosters lies with the FDA. The agency’s vaccine advisory committee is scheduled to meet Friday to discuss Pfizer’s application for approval of its booster shot.

Asked about the extent to which the Israeli data showed vaccine efficacy waning, Biden’s chief medical adviser, Anthony Fauci, said it was “enough that you would be impressed.”

“I would be very surprised if the U.S. data don’t turn out to be ultimately very similar to the Israeli data,” Fauci told POLITICO.

Therein lies the thinking of the White House, especially people like Anthony Fauci. As Israel is in the middle of its biggest spike in Covid-19 cases since the pandemic began, Fauci sees it as impressive. This is absolutely backwards prima facie, but somehow a strong delusion has entranced the White House and much of the nation.

The effects of confirmation bias cannot be ignored. Those who have pushed the vaccines as well as those who have been vaccinated have a natural tendency to see the rosy side of bad vaccine news. Nobody wants to feel like they were conned because nobody wants to think they’re stupid for getting injected with a drug whose efficacy has been questionable from the start to protect themselves from a disease with a 99.93% recovery rate for people under 40.

Even Israel’s government, which is responsible for making themselves the most triple-vaxxed nation in the world, is looking at the data and admitting they’re disappointed. According to Times of Israel:

Health Ministry Director-General Nachman Ash said Tuesday that the current wave of coronavirus infections is surpassing anything seen in previous outbreaks and that he is disappointed that a recent downward trend appeared to be reversing.

Ash’s remarks via video call to the Knesset Constitution, Law, and Justice Committee came as Health Ministry figures showed that over 10,000 new COVID-19 cases were diagnosed the day before and that the positive test rate was climbing.

Pointing out that there is an average of 8,000 new infections each day, with occasional peaks over 10,000, he said, “That is a record that did not exist in the previous waves,” including the massive third wave at the end of last year.

Ash expressed some pessimism, though he observed that, belying fears, there wasn’t a large spike in infections following last week’s Rosh Hashanah holiday — the Jewish New Year — or the opening of the school year at the beginning of the month.

After bringing daily infections down to little more than a dozen a day in June, Israel has been battling to control a resurgence of COVID-19 in what has been its fourth wave of infections since the start of the global pandemic.

The bad news keeps rolling in for the incessant vaccine regimen. Instead of doing what science should dictate, the White House sees it as reason to push vaccines harder. What does that tell you about their motives?
Rating: 0.00/5 (0 votes cast)

Trackback URL for this entry: https://kickthemallout.com/trackback.php/Shocking_Report-Covid_Spike_in_Ultra-Triple-Vaxxed_Israel_is_WHY_Dear_Leader_Biden_Enacted_Medical_Dictatorship