Trump tweeted out a quote from Schumer in 2009, where he said anyone who enters the U.S. is an “illegal alien” and that “illegal aliens should not be treated the same as people who entered the U.S. legally.” 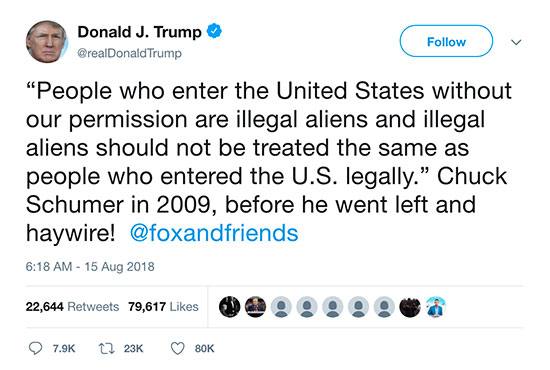 Trump fired off a follow-up tweet of the actual video clip, where Schumer sounds a lot like the president on immigration.

“When we use phrases like ‘undocumented workers,’ we convey a message to the American people that their government is not serious about combatting illegal immigration, which the American people overwhelming oppose. If you don’t think it’s illegal, you’re not going to say it. I think it is illegal and wrong. We have to change it.”

“Above all else, the American people want their government to be serious about protecting the public, enforcing the rule of law, and creating a rational system of legal immigration that will proactively fit our needs rather than reactively responding to future waves of illegal immigration. People who enter the United States without our permission are illegal aliens, and illegal aliens should not be treated the same as people as people who entered the U.S. legally.”

The president wrote in the caption, “Chuck Schumer, I agree!”

Trackback URL for this entry: https://kickthemallout.com/trackback.php/V-Chuck_Schumer-I_Agree-Trump_Trolls_Schumer_With_Old_Illegal_Immigration_Video