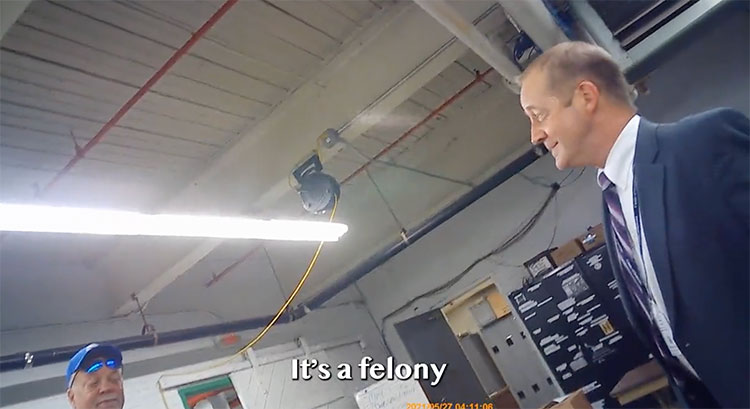 A whistleblower in Delaware County, Pennsylvania released video evidence of destruction of election data and equipment by election officials in the 2020 presidential election.

The videos show election officials admitting their actions were illegal, even “a felony”, but decided to destroy the election evidence anyway.

In one video James Allen, the Director of Elections Operations, is seen in a backroom telling officials to destroy evidence knowing it was a felony.

in another video, Tom Gallager, a lawyer for Delaware County, is seen destroying election tapes — a felony.

BREAKING: Whistleblower in Delaware County, PA with evidence of destruction of election data and equipment. pic.twitter.com/pmGgf8IoQD

More from the whistleblower. pic.twitter.com/ntSv0O73lG

Delaware County was the last county in the state to fully report its ballots for the 2020 election, and several races were in the scope of being flipped by a few thousand votes.

The lawsuit suggests an election machine shredded thousands of absentee and mail-in ballots, with the data corroborating it deliberately erased in the lead up to the right-to-know filing.

Several videos were released as part of the effort to corroborate the claims.

In the first video shared, Tom Gallagher, an attorney for Delaware County, appears to be throwing return ballots into a trash can in anticipation of the election data audit.

“At this point, I don’t want anybody to pick it up, and thinking we threw stuff away,” Gallagher says in the video. “We’re going to have a little campfire going.”

A second video shows a conversation between the whistleblower and a man named “Ziggy.”

“Let’s put it this way. … Yes, there are tapes being tossed,” Ziggy says. “But they are of no audit value.”

UPDATE: Delaware County Pennsylvania Lawsuit Is Going to Blow the Roof Off of the Democrat Voter Fraud in the State

Trackback URL for this entry: https://kickthemallout.com/trackback.php/Whistleblower_Releases_Video_of_Delaware_County_Pennsylvania_Election_Officials_Destroying_Evident_and_Ballots_in_Backroom